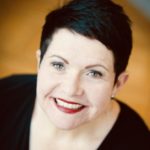 Australian born soprano Sharon Kempton, completed Bachelor of Music and Master of Music degrees at the University of Melbourne. The recipient of many prestigious prizes including the German Operatic Award (2001) and the German Australian Opera Grant (2003), Sharon embarked on her European career as a member of the Cologne Opera Studio, Germany, followed by an eleven year engagement as soloist at the State Theatre in Wiesbaden, Hessen. Sharon is now engaged across Europe as a freelance Artist.

Most recently Sharon was acclaimed for her performance as  Gräfin de La Roche in Staatstheater Nürnberg’s production of Die Soldaten by Bernd Alois Zimmermann directed by Peter Konwitschny, with musical direction by Markus Bosch, and in Oper Köln’s production of the same operatic work directed by Carlus Padrissa, under the baton of Francois Roth.