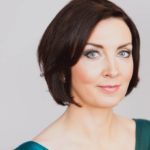 Lyric mezzo-soprano Hannah Mason was born in Yorkshire and was awarded a scholarship to study at the Guildhall School of Music and Drama and at English National Opera on their Opera Works training programme. She has performed with many major opera companies including The Royal Opera House, English National Opera, Opera North, Buxton Festival and the Birmingham Opera Company.

Roles have included Apprentice in Wagner’s Die Meistersinger von Nürnberg at ENO, Susanna in Graham Vick’s production of Khovanskygate by Mussorgsky with the Birmingham Opera Company and the City of Birmingham Symphony Orchestra, cover of Mother in Jonathan Dove’s Swanhunter at Opera North and Hänsel in Hänsel and Gretel at the Buxton Festival. Hannah also specialises in modern opera having worked with the Tête a Tête Festival, created the role of Queen Bee in The Swarm composed by Heloise Tunstall-Behrens and most recently the role of Mother in Ice Cream: The Opera written by Ian McMillan and composed by Russell Sarre.

Future work includes working with English National Opera in their productions of Akhnaten, Die Zauberflöte, The Merry Widow and Iain Bell’s new composition, Jack The Ripper: The Women of Whitechapel.