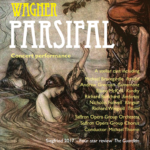 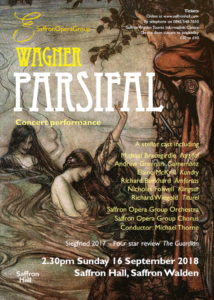 After triumphant performances of The Ring Cycle and Die Meistersinger – which have been hailed in the national press as some of the UK’s most ambitious and successful British Wagnerian events of the last decade – Saffron Opera Group now turns its attention to Wagner’s final masterpiece: Parsifal. The performance will take place on September 16 in Saffron Hall.

Drawing on medieval legends, Buddhist philosophy, and pre-Freudian concepts of sexual pathology, Parsifal tells the story of a callow and foolish young man who meets a moribund community of Grail Knights. They believe he might be the ‘Holy Fool, made wise by compassion’ who is destined to save them from the evil magician Klingsor who has stolen their magic spear. Unable to comprehend their beliefs, Parsifal deserts them. Only when he has rejected the advances of a tormented sorceress does he learn to feel compassion for others’ suffering. Then he is able to take the spear from Klingsor, return it to the community, and restore the mysterious power of the Grail.

Wagner did not call Parsifal an opera; instead he named it ‘a festival play for the consecration of the stage’ in order to give an idea of its epic power and cathartic scope, and it contains some of the composer’s most exalted and powerful music. Highlights include the mysterious unveiling of Grail in Act 1, the appearance of Klingsor’s seductive Flower Maidens in Act 2, and the beautiful and redemptive ‘Good Friday music’ of Act 3.

Mixing established professional singers and exciting stars of tomorrow, the cast is headed by clarion-voiced tenor Michael Bracegirdle in the demanding title role. A singer who has sung with The Royal Opera, Covent Garden, English National Opera and Royal Danish Opera  (and who previously appeared with SOG as Siegmund in Die Walküre and also in The Rake’s Progress), Bracegirdle is rapidly establishing himself as one of the leading young British Heldentenors.

The ensemble also includes several SOG favourites, who make welcome returns to the company. Elaine McKrill is Kundry, a sorceress ordered to seduce Parsifal, but who is tormented by shame and guilt for a crime in her past. McKrill has performed major Wagner and Strauss roles with The Royal Opera, Scottish Opera, Dutch National Opera, Stuttgart Opera and Canadian Opera Company among others, and gained stupendous reviews for her Brünnhilde for SOG. ‘Strong, noble, profoundly affecting… her lyrical agile soprano sailed skilfully through the demanding score’ (Operissima.org). She is joined by the superb baritone Nicholas Folwell (Alberich in SOG’s Ring Cycle) as Klingsor, and Andrew Greenan (Wotan, Wanderer and Hans Sachs for SOG) as the wise Knight Gurnemanz.  Sonorous bass Richard Wiegold (The Royal Opera, Welsh National Opera, Lyric Opera of Chicago and Pogner in SOG’s Die Meistersinger) takes the role of Titurel and charismatic baritone Richard Burkhard is king Amfortas, whose relationship with Kundry has plunged the Grail Knights into chaos.

The cast is rounded out by further established and up-and-coming singers in the roles of Grail Knights, Esquires and Flower Maidens.

Under the commanding baton of Wagner specialist Michael Thorne, and with a hand-picked orchestra and chorus, Parsifal promises to add further lustre to Saffron Opera Group’s reputation as a beacon of Wagnerian excellence.